With warm temperatures, palm trees and plenty of beach scenery, Costa Rica may not appear at first glance to be a place that gets wrapped up in winter holidays, but don’t be fooled! Just because there’s no snow, Santa Claus or winter jackets to be found here doesn’t mean that Costa Rica is missing out on the Christmas spirit. Here in Costa Rica, we traded white snow for white sand beaches and enjoyed the sunshine and the holiday spirit in paradise.

December is always a vibrant time in Costa Rica – a celebration of the holiday season, lights, fiestas, family gatherings and Christmas traditions in Costa Rica, however Costa Rica’s Christmas celebration begins long before December.  Since Thanksgiving is not celebrated nationally here here and Halloween has only been adopted for the ex-pat community, Christmas decorations and lights start as early as the beginning of October. 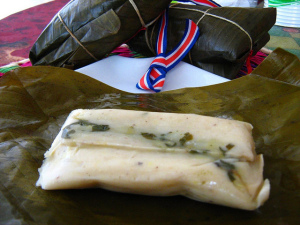 As a heavily Catholic country, Costa Ricans place a huge importance on religion during this time of year. Construction of a family’s “portal” or Nativity scene is an important event, and it often occupies a large space in the living room or a patio. Friends and family get invited over to show off the nativity scenes as they are very elaborate and are filled with crafted wood, decorative colored papers, plant mosses and grasses, twigs and sawdust, glitter and lighting – and, of course, the statues of Mary, Joseph, the shepherds and their animals. On Christmas Eve, Baby Jesus is placed in the manger just before the family goes to Christmas Midnight Mass, a ceremonial event often lasting more than 2 hours.

And as far as food traditions are concerned, Costa Rica is rich with Christmas-time flavors.  Whereas in the United States, many bake holiday cookies to share with families and friends, in Costa Rica, Christmas-time is all about tamales, Christmas cake, farm-raised roasted pork and “rompope” or egg nog. No holiday is complete without traditional cuisine, and slow-cooked tamales are the season’s most awaited food. While recipes vary (nearly every family has their own), a tamaleis made from corn flour stuffed with potatoes, vegetables, and a savory filling such as pork or chicken, intricately wrapped in plantain leaves and then steamed. The preparation is laborious, and is usually a big family affair that spans over several days.

As Christmas came to a close this year, nearly everyone in Costa Rica was privy to a front row show of fireworks. December marks the only time fireworks are legally sold and available for purchase and it seems as though everyone made a point to light up the sky in bright and vivid colors.  Neighbors congregated in their front yards and streets to watch the explosions in the sky and cheers to another Christmas well done.

Traveling in Costa Rica during December is a culture-rich experience full of holiday traditions, grand fiestas and festivals and a true testament to the importance of family. Visitors who were lucky enough to be here during this magical time got a taste into the strong community ties and passion while enjoying it with their feet in the sand.

Have Questions about your Travel to Costa Rica?

Please fill out this form and our Travel Team will contact you shortly.